Rapid beating of the heart can cause the sensation of palpitations, which are often described as fluttering, pounding, and beating sensations in the chest.  Sometimes these palpitations are rapid enough to affect other parts of the body, and people with palpitations may also describe feelings of lightheadedness, fatigue, and shortness of breath.  Occasionally, these palpitations are rapid enough to cause people to pass out (syncope), though this is rare.  Rapid palpitations may come from the heart’s upper chambers, the atria, and in most cases, are not generally considered life threatening (although rare exceptions do exist).  Alternatively, palpitations may come from the heart’s lower chambers, the ventricles, which in some cases may be life-threatening.  Also, the natural electrical “bridge” between the atria and ventricles, the atrio-ventricular (AV) node,  can be a common site of arrhythmias causing palpitations.  The best way to start the diagnosis of the cause of palpitations is to have an electrocardiogram (ECG) read by a physician experienced in heart rhythm disorders.

Supraventricular tachycardia (SVT) is a category of arrhythmias that come from above the ventricles.  The most common type of regular SVT is AtrioVentricular Nodal Reentrant Tachycardia (AVNRT), and is responsible for 50% of SVT cases (1).  AVNRT is more common in women than men, and typically occurs in patients between 20 and 40 years old.   This long, descriptive arrhythmia name details the biology of the abnormal electrical circuit within the heart that leads to the palpitations that are commonly described.  In AVNRT, there is a small circular (Reentrant) electrical circuit that “spins” around in the AV node, the normal, natural electrical bridge between the atria and ventricles.  This circuit spins at approximately 110-250 beats per minute, which is much faster than the normal natural heart rate of 60-100 beats per minute (2).  Given the central location of the AV node “sandwiched” between the atria and ventricles, when the electrical circuit excites the atria and ventricles, it excites them simultaneously and rapidly, thus preventing orderly sequential filling of blood first within the atria, and then to the ventricles.  This rapid, uncoordinated, regular rhythm reduces the efficiency of the heart to pump blood and results in sensations of palpitations, lightheadedness, and malaise which are commonly felt as described above.

If a patient is stable (normal blood pressure, awake, aware) then an electrocardiogram is the first test to determine the cause of palpitations.  An ECG with typical AVNRT is shown below (3): 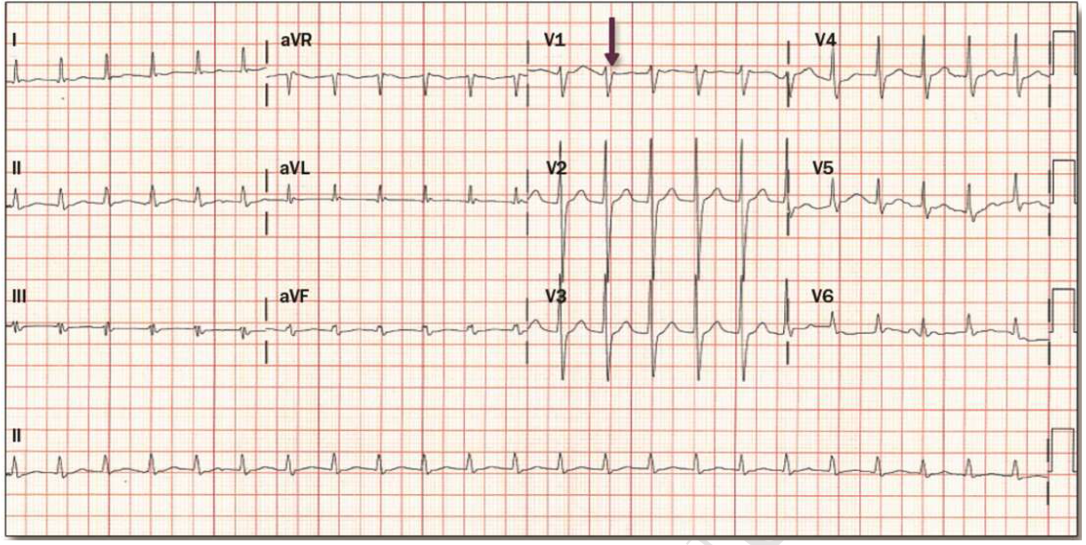 Here is an example of an ECG of AVNRT

In this ECG, as seen in the 2015 SVT Guidelines, the electrical rhythm of the heart is regular and fast, approximately 140 beats per minute.  The arrow points to a classic finding in AVNRT, a wave showing that atria and ventricles are electrically excited nearly simultaneously, suggesting that AVNRT may be the cause of tachycardia.

Given that the AV node is closely linked with the brain via the nervous system, specifically the vagus nerve, it follows that simple maneuvers that may stimulate the vagus nerve are first-line for the diagnosis and treatment of AVNRT.  Vagal maneuvers include breath holding (valsalva), massage of the carotid arteries, and facial exposure to cold water.  All of these maneuvers cause the AV node to receive enhanced vagus nerve input and thus may break the tachycardia and establish normal (sinus) heart rhythm.  If vagal maneuvers are not successful in breaking the tachycardia, then the physician may give medications to help block the AV node and thus restore normal rhythm with drugs.  Unfortunately, AVNRT may come back, and medications alone may not prevent the recurrence of this arrhythmia long-term.  For those patients who desire to be free of the arrhythmia without drugs, or for those in whom drugs have consistently failed, ablation (destruction) of part of the AV node (destruction of a “slow pathway,” and preservation of a “fast pathway”) may be considered.  Catheter ablation of the AV node slow pathway is relatively safe and changes the AV node biology to prevent further episodes of AVNRT and palpitations.  The major risk of AVNRT ablation (modification of the slow pathway) is full destruction of the AV node; which would require the patient to receive a pacemaker as an electrical “bridge” between the atria and ventricles.  Usually ablation has a > 97% success rate, meaning that the AVNRT is “fixed” by ablation.  There is an approximately ≤ 1 % risk of AV block that would require a pacemaker implantation, though this is a very real risk that every patient should talk to their doctor about.  Other risks of the procedure include pain, bleeding, damage to surrounding structures, and bleeding around the heart that may require drainage.  A full discussion of the risks and benefits of this procedure is always warranted between a doctor and patient.

Here is a flow-chart from the 2015 SVT guidelines for the diagnosis and treatment of acute and chronic AVNRT: 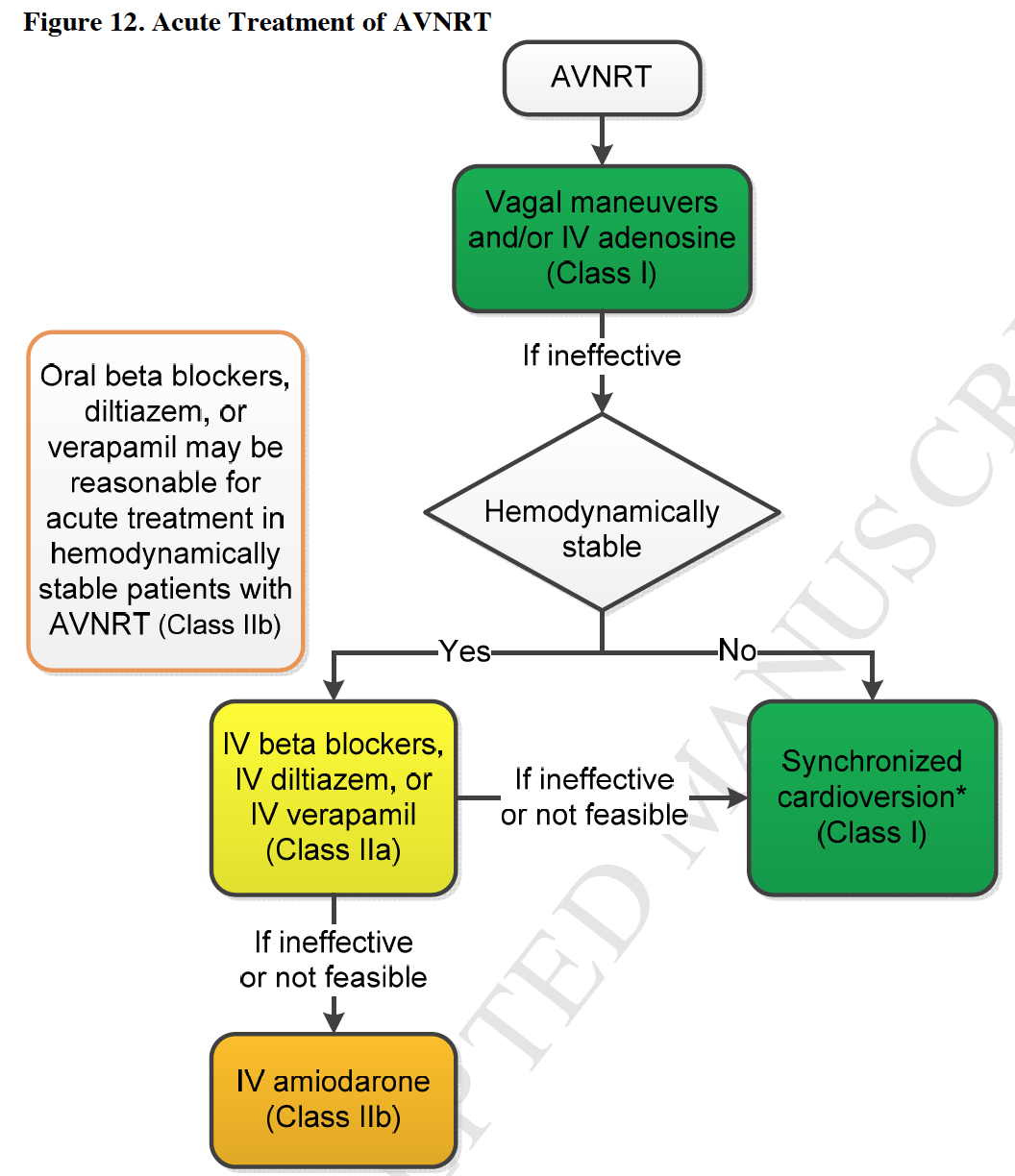 Algorithm for the Treatment of Acute AVNRT. 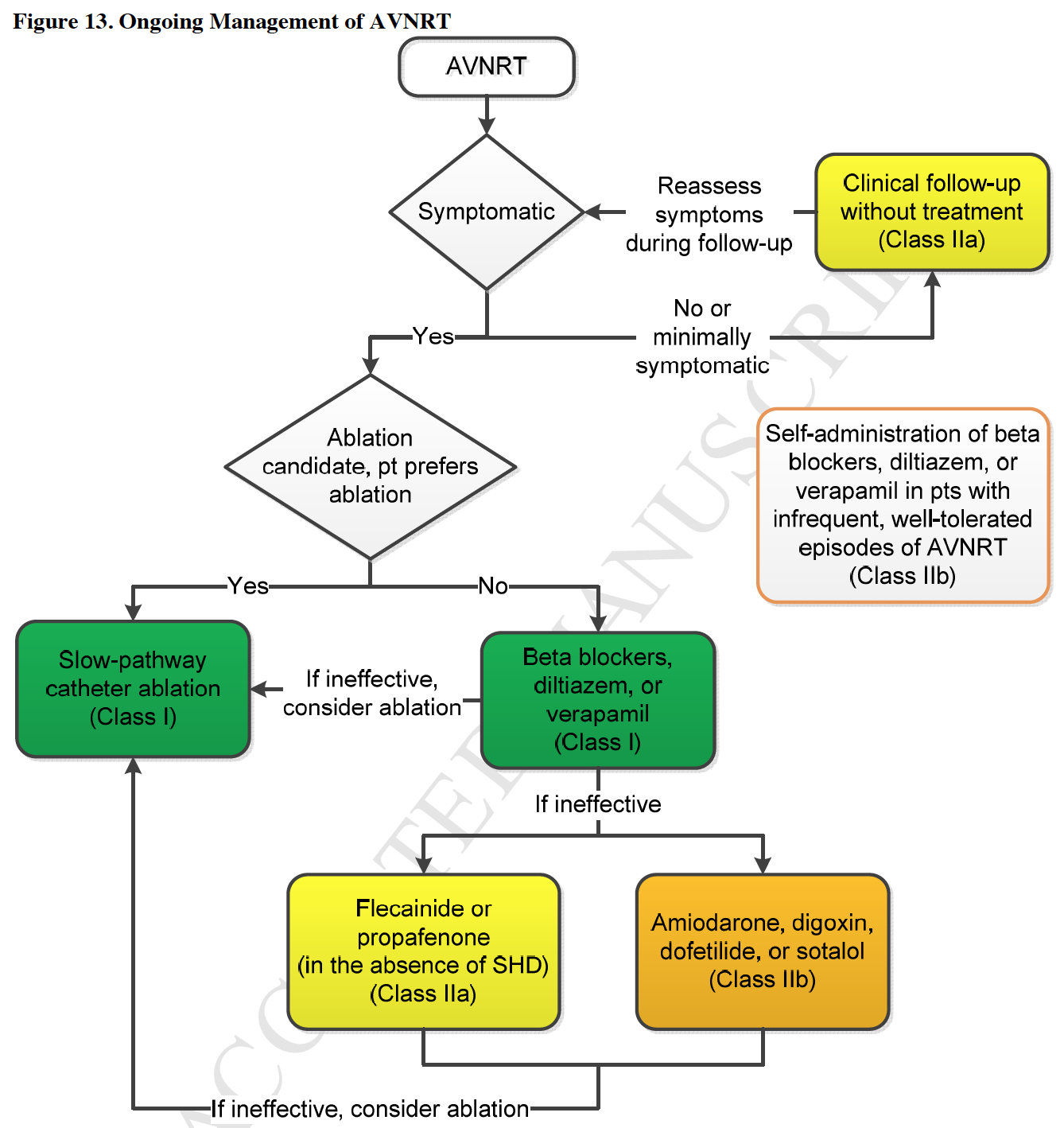 Algorithm for the Management of Chronic AVNRT.

Hopefully this post was helpful to reduce confusion on a pretty complex disease.  Please see the references below for more information about AVNRT.